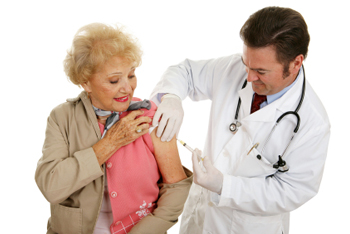 Senior woman receiving a vaccination from her doctor.

Healthchek offers many types of immunizations and shots.  We give seasonal flu shots, pneumonia shots, B12 shots, and many other immunizations.  Contact us for information about availability.

When should I get vaccinated?

Flu vaccination should begin soon after vaccine becomes available, ideally by October. However, as long as flu viruses are circulating, vaccination should continue to be offered throughout the flu season, even in January or later.

While seasonal influenza outbreaks can happen as early as October, most of the time influenza activity peaks in January or later. Since it takes about two weeks after vaccination for antibodies to develop in the body that protect against influenza virus infection, it is best that people get vaccinated so they are protected before influenza begins spreading in their community.

Flu vaccine is produced by private manufacturers, so availability depends on when production is completed. Shipments began in late July and August and will continue throughout September and October until all vaccine is distributed.

Why should people get vaccinated against the flu?

Influenza is a serious disease that can lead to hospitalization and sometimes even death. Every flu season is different, and influenza infection can affect people differently.

Even healthy people can get very sick from the flu and spread it to others. Over a period of 31 seasons between 1976 and 2007, estimates of flu-associated deaths in the United States range from a low of about 3,000 to a high of about 49,000 people. During a regular flu season, about 90 percent of deaths occur in people 65 years and older. The “seasonal flu season” in the United States can begin as early as October and last as late as May.

Benefits of Vitamin B12 Injections

The human body needs vitamin B12 to make red blood cells, nerves, DNA and to carry out many essential functions. Some people don’t consume enough dietary vitamin B12 to meet their needs, while others can’t absorb enough, no matter how much they ingest. As a result, vitamin B12 deficiency is relatively common, especially among people over fifty, vegetarians and vegans. People who drink alcohol, people with digestive issues, anyone regularly taking medications known to affect vitamin B12 absorption such as Prilosec and Tums, anyone who has recently had surgery or dental procedures using nitrous oxide.

Absolutely. Injections bypass the digestive tract and can cross the blood-brain barrier. As a result, injectable vitamin B12 has a more direct route to the cells, is readily metabolized, and you feel the benefits faster!

Would you like to host a wellness screening event at your location?